Rights and Responsibilities of Roman Citizens

The Twelve Tables were the first written laws of ancient Rome. These laws were the foundation of the rights and duties of Roman civilization, some of which are still used today. These are examples of the Tables that describe rights and responsiblities of Roman citizens.
Rights
The Romans were one of the first civilizations to have written rights for its citizens. Later governments based their rights and freedoms off the Romans and, as a result, Roman citizens had many rights that are similar to our rights today. For example, a citizen had the right to bring a person to court to settle a dispute. A citizen also had the right to vote for government officials, and to hold a position of power. Roman fathers also were entitled to power over their families. 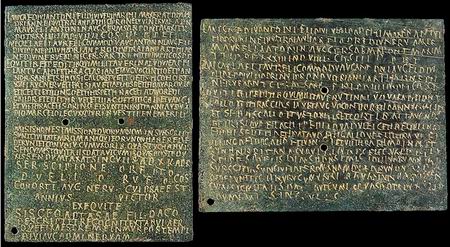